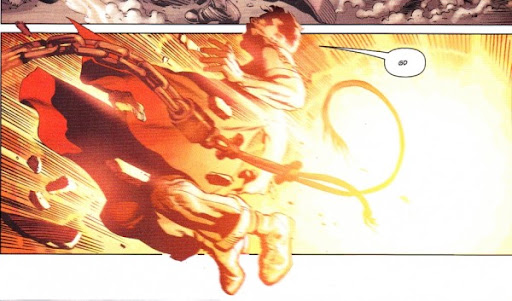 Grant Morrison used two letters in Action Comics #1, which were spoken by Superman after he was hit by an explosion (see image above), that have sparked a small bit of controversy. Those two letters were G and D, which has one avidly Christian Comic Shop Owner screaming blasphemy on his shop's Facebook page and stating:
"As of today’s release of Action Comics #1 by Grant Morrison, The Comic Conspiracy, will until further notice, be boycotting all future Grant Morrison books. If you want Action Comics, you will have to buy it elsewhere."

I laughed my ass off when I heard this. All this Christian Comic Shop Owner is doing causing a stir because he firmly believes that Morrison’s liberal views have gone too far by having Superman say, “GD.” Apparently “GD” stands for god damn and according to the Christian Comic Shop Owner the Man of Steel would never use the lord’s name in vain and Christians should be outraged at this “apparent” blasphemy from Morrison by boycotting the sale of Action Comics and his future work overall. The Christian Comic Shop Owner even tries to justify his point a few times, but shoots himself in the foot every time. Here are some examples from the shop's Facebook page:

So, if it is in that character to say it then they can say it otherwise those evil letters should never cross the lips of one so "perfect". Superman isn't perfect! He isn't human. He's a super god who can do as he pleases and error as he pleases. And as to Superman being an America icon, well he gave up his American citizenship in Action Comics #900. I could go on, but we should hit another ridiculous Facebook post.

"It grieves me to see a liberal Scottish schmuck like Grant Morrison take these liberties. I’m sorry, Superman would NEVER take God’s name in vain. In the words of the late Jim Croce, “You don’t tug on Superman’s cape.""

As a good Christian Comic Shop Owner, I’m going to hurl an insult at Grant Morrison for being the devil that finally went too far in changing up my all time favorite superhero, because I know he would never say such a thing ever. Which version of Superman: the Golden Age, Silver Age, Bronze Age, Modern Age, The New Rejiggered 52, Elseworlds or any other incarnation or multi-universe you can think of; which version of Superman would never say, “GD”? Superman like every other superhero has gone through changes over the years, and when a fan boy can’t handle the change they cry foul. Mr. Christian Comic Shop Owner is such a fan boy it seems because to cry to this extreme all it does is make a fool of the fan boy and give the internet some cannon fodder for discussion, argument or general waste of time.
And with regards to Jim Croce’s quote, “You don’t tug on Superman’s cape,” tell that to a child who needs to get Superman’s attention.

This next quote sent me over the edge with laughter and wonderment at the potential for stupidity in the human race.
"I deal with books like “Crossed” and “The Boys”. I accepted gay characters being introduced into a children specific book like Archie Comics. I however am getting very tired of having comic writer’s liberal agendas force fed to me. Mr. Morrison has stepped over my line. If I have to stand alone on this… I will."

While the internet will go back and forth about this boycott I’m just going to sit back and enjoy the free publicity for our shop and podcast. What?! How am I going to get publicity? For those of you who didn't know already the comic book store in North Carolina that is boycotting Grant Morrison's Action Comics and future work is called "The Comic Conspiracy" absolutely no relation to our wonderful shop Comics Conspiracy or our podcast The Comic Conspiracy. We will continue to carry Morrison’s work and talk about it on the podcast so you can still get your fix of Morrison from Comics Conspiracy.