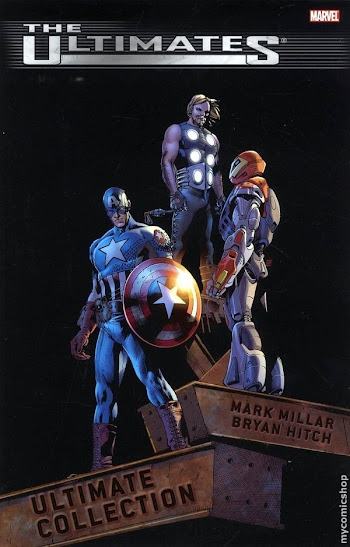 My random comic pick on The Comic Conspiracy: Episode 56 is the Marvel Comics title The Ultimates Collection written by Ryan Higgins arch nemesis Mark Millar with art by Bryan Hitch.
The Ultimates Collection collects the first and second volumes of The Ultiamtes. This series from Marvel's Ultimate Universe is an incarnation of the Avengers for a new generation of readers. The movie has some influence from these stories, and I enjoyed them when I read them despite the fact that they were written by Mark Millar.
If you watched The Avengers Movie and want to read some Avengers comics I would recommend The Ultimates Collection. You can stop reading after the first two volumes, because Ultimates 3 and beyond are just garbage.
Some of the other recommendations for Avengers reading from my fellow conspirators were: the Kurt Busiek run on Avengers called Avengers: Assemble, The West Coast Avengers, Operation: Galactic Storm, and The Kree / Skrull War.


Remember you can download digital comics at our Comics Conspiracy - Comixology Storefront or you can order comics from us directly by visiting the shop, giving us a call (408) 245-6275, or dropping Ryan an email at ryan@comicsconspiracy.biz.