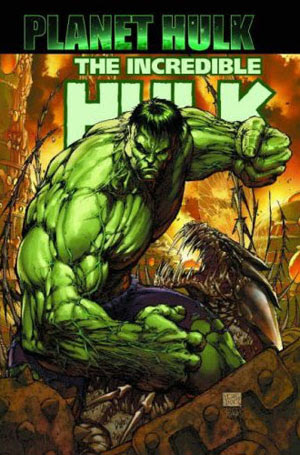 My random comic pick on The Comic Conspiracy: Episode 34 is the Marvel trade Planet Hulk written by Greg Pak with art by Carlo Pagulayan.
I know that I have had a lot of hate for Marvel so I wanted to show you that there are gems out there in the Marvel Universe that are worth reading. Planet Hulk is one of these books. I read this trade a few years ago when I got back into comics and loved it. Pak does an excellent job giving the reader a engaging and savage story about everyone's favorite green skinned menace.
Hulk is tricked by the Illuminati (the secret society that consisted of Black Bolt, Doctor Strange, Iron Man, Mister Fantastic, Professor X, and Namor) and he is supposed to be sent to a peaceful planet where he can finally be alone, but there is a malfunction with the spacecraft. The Hulk crash lands on a very brutal and fierce planet where life is anything but peaceful. Hulk finds himself enslaved and put to fight in an arena very much like gladiator battles the Romans would watch for entertainment. Hulk just wants to be left alone, but will this be the case? You'll have to read to find out.

(There is a Prelude to Planet Hulk trade that directly leads up to Planet Hulk, but you don't need to read it. And if you ask me you can just Wikipedia any Hulk story after this one; especially World War Hulk and War of the Hulks.)