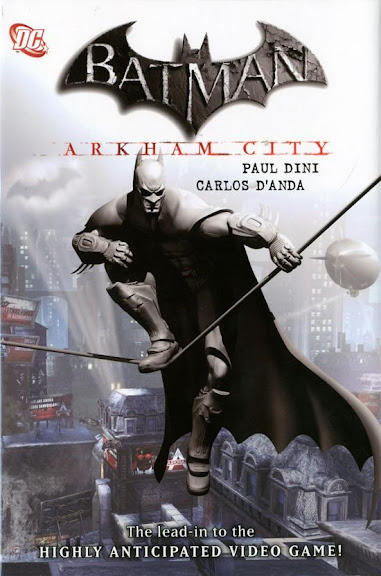 My random comic pick on The Comic Conspiracy: Episode 33 is Batman: Arkham City written by Paul Dini with art by Carlos D'Anda, Dustin Nguyen, Ben Herrera, Ted Naifeh and Derek Fridolfs. This awesome story takes place in between the events of the video games Arkham Asylum and Arkham City. Currently this series is only collected in hardcover, but the soft cover should be coming out some time next year, but getting the graphic novel now you get the Batman: Arkham City Exclusive Online Digital Chapters which weren't released in print till now.
I would assume that the softcover would also include these digital chapters, but with the way DC has been in the trade market (R.E.B.E.L.S. Vol. 5 and Suicide Squad Vol. 2 cancellations - I'm still pissed) I am not so sure. Your decision though, but I will say this about Batman: Arkham City it is a definite must read and if you are a video gamer looking to get into comics it is a good starting point.