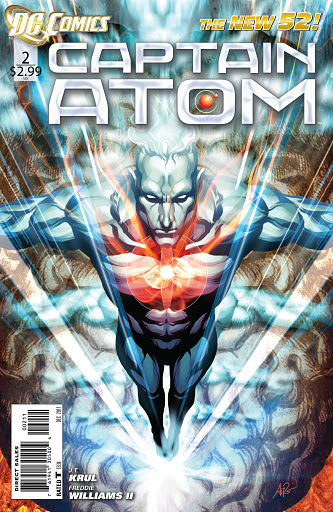 My random comic pick on The Comic Conspiracy: Episode 30 is Captain Atom #2 written by J.T. Krul with art from Freddie Williams II. Captain Atom is a very powerful character in the DC Universe and in this "New Rejiggered 52" his character has been rebooted to a point where he is just figuring out his powers

After the events of issue one Captain Atom is bombarded of information from the digital airwaves and it is too much for him. He gets this new power under control with help from The Continuum an advanced scientific research facility. He uses this new ability and after sifting through the stream of invisible digital information flowing through the air he hears the plea of a boy dying of brain cancer, and he feels compelled to help.
I don't want to spoil the issue so check it out because it is one of the rare examples of a good story contained in a single issue and that is why it is my random pick this week.