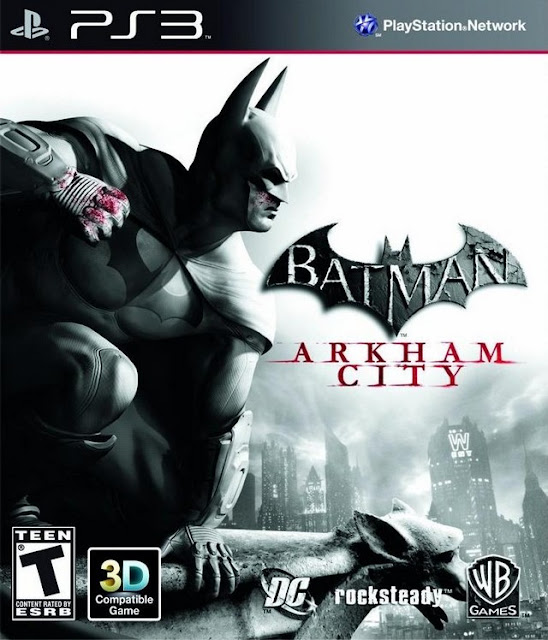 I have been up late for almost a month (pissing Calli off in the process) playing my recently picked up copy of Batman: Arkham Asylum - The Game of the Year Edition and Rocksteady Studios newest installment Batman: Arkham City. Needless to say, I have had a lot of Batman in the last month and I'm smiling like Joker inside and out about it all.

Batman: Arkham City is a fantastic addition to the Batman video game franchise not only because it is a great game, but it also introduces a lot more of the villains and heroes from the Batman Universe in the process. It is a must buy.

Many of the voice talents from Arkham Asylum return for this newest trek into the Batman Universe. The major ones are Kevin Conroy as the voice of Batman and Mark Hamill as the Joker. This will be the last time Mark Hamill will be the voice of the Clown Prince of Crime and this makes me a little sad.

As of writing this I have completed about 70% of Arkham City overall and I haven't gotten everything. I almost have all of the Riddler trophies and such (400 for Batman and 40 for Catwoman), and I have one side mission to complete (damn AR Training...I hate gliding). I'm not big on challenge mode achievements so I don't think I will be getting much more of the overall completion of the game done, but there is still the New Game Plus version of the game to play and a couple of little things like visiting Calendar Man on the twelve holidays, seeing Killer Croc's cameo appearance in the sewers, decoding some hidden signals, finding the Scarecrow reference and in general enjoying the world of Arkham City again.

I'm waiting to hear about the Nightwing bundle to see if it is worth getting. So, leave me a comment if you have played as Nightwing to let me know what you think.

If you are on the fence about getting this game you shouldn't be. It is worth the $60 bucks and if you haven't picked up Batman: Arkham Asylum I highly suggest you do. The games are connected story wise, but you don't need to play Arkham Asylum to get into Arkham City.

The comic Batman: Arkham City written by Paul Dini (who also wrote the story for both video games) with art by Carlos D'Anda, Dustin Nguyen, Ben Herrera, Ted Naifeh and Derek Fridolfs, I would recommend picking up, because it directly leads up to the events in the video game and is honestly a really good read. I actually need to get the hardcover because it also includes the Batman: Arkham City Exclusive Online Digital Chapters which weren't released in print till now.

5 out of 5 Stars, 10 out of 10, how many Gabrielle Anwar's is perfection again? You get the hint. Batman: Arkham City is the must have video game of the year so just go out there and buy it already!