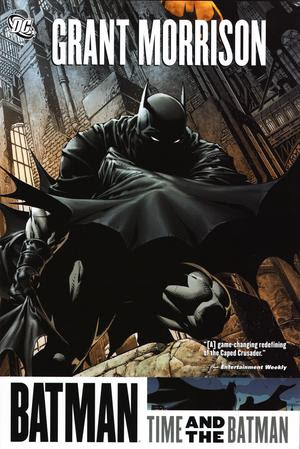 My random comic pick on The Comic Conspiracy: Episode 31 is Batman: Time And The Batman written by Grant Morrison and Fabian Nicieza with art by David Finch, Tony Daniel, Andy Kubert, and Frank Quietly. This trade collects Batman issues #700, 701, 702, and 703 and it is basically a must read if you have read or plan to read Final Crisis, R.I.P., Bruce Wayne: The Road Home, and The Return of Bruce Wayne. Time And The Batman helps explain a lot of what happens to Batman in between panels, story arcs and issues which definitely makes it a gap filler trade and a good addition to your already to bookshelf busting trade collection. (The hardcover is out now and the softcover version will be released on February 14, 2012.)
I enjoyed these issues as they came out, but I really wish I had them when I was reading all those other stories while Batman was no longer with us. These issues are a must if you are tackling the Batman Universe from Final Crisis through Batman Incorporated.
I will say this though, when I go back to re-read Final Crisis, R.I.P., Bruce Wayne: The Road Home, and The Return of Bruce Wayne this trade will be pulled out and read along with it.