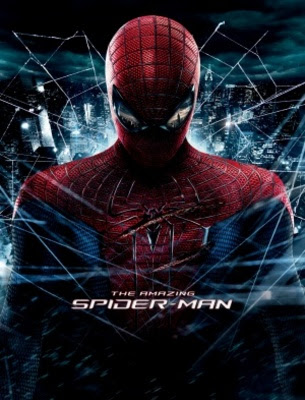 First off I want to thank the family that sat behind me for almost ruining this movie going experience. Let me put this out there, and hope you get it. Your son needs to shut up, don't foot tap seats in front of you, and why do you need to read each name at the end credits to your illiterate child? Inconsiderate people suck.
Now that I have that out of the way. I went to see a movie called Amazing Spider-Man, and it was overall a good movie. This installment reboots the Spider-Man film franchise, and it did a fair job of bringing a new Peter Parker/Spider-Man to the big screen. I could see a lot of influence from the Ultimate Spider-Man books in this version of the film, as well as a solid modernization of Gwen Stacy while keeping her look very "sixties/seventies", and I was so happy they actually had a believable smart-ass Peter Parker/Spider-Man who makes his web shooters. The casting in the movie was really solid: Andrew Garfield as Peter Parker/Spider-Man worked, Emma Stone as Gwen Stacy was perfection, Rhys Ifans as Dr. Curt Conners was great, Denis Leary as George Stacy...it's Denis "Fucking" Leary nuff' said, and Martin Sheen and Sally Field as Uncle Ben and Aunt May were solid as younger versions of these characters. All of the actors did a fantastic job in this movie, and I hope they continue with this franchise till the end.
The film had a lot of sad moments, and emotionally charged scenes that had some of the audience members at the showing I went to in tears; not sobbing tears, but I distinctly heard some intense sniffles. So, I can see why this Spider-Man movie might attract more girls into theaters (which is how you make money by the way; get the females into something, and the boys will spend money on it without a second thought). I was a little bummed that there wasn't a J. Jonah Jameson appearance in the movie, but who else would be able to play him besides J.K. Simmons.
Overall, I liked this movie it was entertaining, and engaging enough that I wasn't bored, and I think the only complaint that could hold ground is that it was a little to early to do a reboot of this film franchise. There is always room for improvement, and since Spider-Man has already been slated for a trilogy I would say they got two more films to make the whole thing spectacular.
I will talk at length more about what I liked, and didn't like about this film on The Comic Conspiracy: Episode 65, because my co-host Ryan Higgins didn't like the movie, and is claiming it is worse than Spider-Man 3. Episode 65 is going to be an interesting podcast.
If you want to know if you should see Amazing Spider-Man in the theaters I say, find a matinee or a discount theater if you really have to see it on the big screen; there isn't enough eye candy to justify a big screen showing. However, if your girlfriend says she wants to see it you go anytime she wants. It was a good movie, not sensational, just good. So, if you are down for some comic book hero action, and drama then you need to get to a local theater and check out Amazing Spider-Man.