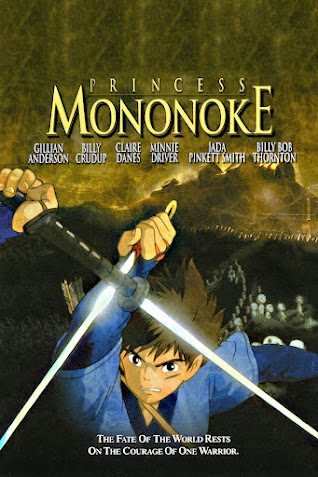 My random "Anime" pick on The Comic Conspiracy: Episode 60 is a film called Princess Mononoke that was written, and directed by Hayao Miyazaki of Studio Ghibli. The movie at its core is a piece about the conflicts between nature and technology, which is shown in an amazing, and gripping way in the film.
It was released in Japan on July 12, 1997, and then in the United States on October 29, 1999. I became interested in the film because of the mass advertisements about the voice talent used in dubbing the film over for an American audience. Here is a list of the American voice actors who made the English Dub accessible (in my opinion) to a larger audience:

The film is beautiful to watch and very engaging and I highly recommend it for anyone who has an interest in cartoons. A funny thing about this film I was not aware that Neil Gaiman had some adaption credits on this until recently and so now I like the film a little bit more. Go check it out for yourself though.