My random comic picks on The Comic Conspiracy: Episode 61 were two magazines: Creator Owned Heroes and Bleeding Cool. One is a creator driven comic/magazine hybrid from Image and the other is an online comic news/gossip site in the physical form of a comic sized magazine. Both have different takes, and both are books you should check out. 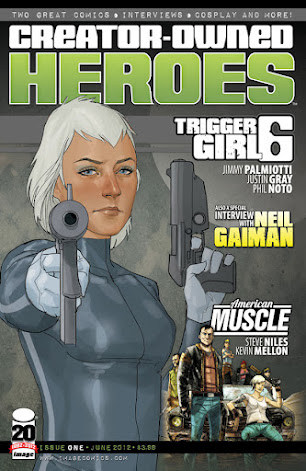 Creator-Owned Heroes is a comic/magazine from Jimmy Palmiotti, Justin Gray, Phil Noto, Steve Niles, and Kevin Mellon, which includes (as the top of the cover advertises), "Two Great Comics * Interviews * Cosplay and More!" I will attest that is did have all these things, and they were very interesting and enjoyable. Issue one was a good start to this mash-up of Tales to Astonish, and the middle section of a magazine. Both comics, Trigger Girl 6 and American Muscle, were interesting, and grabbed my attention enough to make me want to see what else happens. The interviews, and other little opinion pieces were honest and a quick, but insightful read. Overall, I enjoyed reading through this book because it was nice to have something on my pull list that took me more than seven minutes to read. This format is a good one for this type of title from Image comics, and it may change to test the waters, but I hope it keeps going, because if you like trying something new or are tired of the crap the major publishers are pumping out then you should give Creator Owned Heroes a try.
After we recorded Episode 61: Charlie, Toby, Omar and our live studio audience Jim each grabbed a copy of Creator Owned Heroes off the shelf to give it a read. We are now out of the issue, but if you show some interest I think Higgins will try and restock the shelves and when issue two comes out he may bump his orders. Let him know by calling (408) 245-6275. 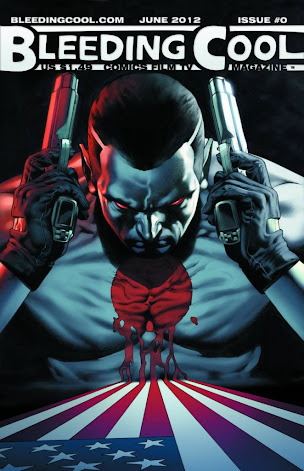 If you are into comics you have probably been to Bleeding Cool.com a time or two. Well now you can have Bleeding Cool at home in the magazine bin by your toilet. Bleeding Cool #0 came out last week and it was a soft release that was packed with interviews and features, a Walking Dead price guide, a retailer list (which we are on) and a few other things. Now there hasn't been a industry spanning magazine for comic books since Wizard Magazine was cancelled over a year ago. So, why try and release a comic book magazine when the market for those media types is dying? Why not? The comic book industry may not need a comic news magazine anymore, but it does need something for people to be able to go to for information. I have personally had people ask me in the store if we have Wizard Magazine, and they seem disappointed that there isn't a go to publication to gauge where comics are, and where they are going in the coming months. Well, Rich Johnston of Bleeding Cool.com thought that it was time to give you the comic fans a magazine that does more than just give you gossip, but gives you insight into the comic book industry itself.
In October you will get the first real taste of Bleeding Cool with issue number 1. It will be over 100 pages, and filled with opinions, interviews and information; everything a comic book reader could want. Hopefully it will be a success and continue. The plan is to have an issue every two months, and I for one am excited to see this type of risk being taken in a time when magazine print is dying, because the industry lost a piece of its core when Wizard Magazine died, and I think that Bleeding Cool has the potential to replace that missing piece. If you haven't picked up the zero issue of Bleeding Cool you should. It is only a buck fifty, and it will, like I said earlier, give you something to read while you drop the kids off at the pool.

Both of these titles are worth checking out, and I hope that you do.