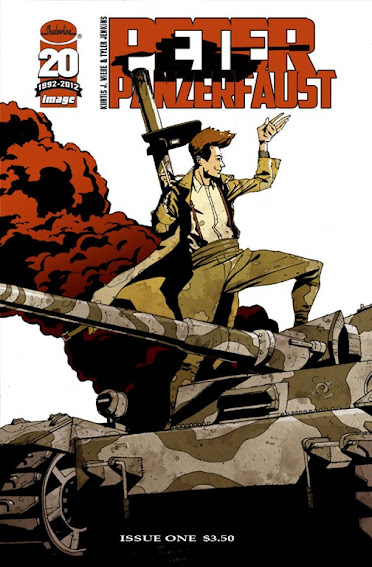 My random comic pick on The Comic Conspiracy: Episode 47.5 is the Image title Peter Panzerfaust #1, by Kurtis J. Wiebe with art from Tyler Jenkins. I picked this up while on my comic book shop tour of San Antonio and I must say I was impressed by this comic.
Set during the early days of World War II the first issue puts you in the French city of Calais, which was the first to fall to the Germans in the spring of 1940. A mysterious American boy named Peter helps a group of orphans survive and you hope they do.
The issue ended abruptly in the middle of action so I hope the next issue keeps up my interest, but I think that it will. So, get out there and try Peter Panzerfaust #1 for yourself.

Remember you can now find this title and more in digital format at our Comics Conspiracy - Comixology Storefront or you can order comics from us directly by visiting the shop, giving us a call (408) 245-6275, or dropping Ryan an email at ryan@comicsconspiracy.biz.