A family vacation brought me out to San Antonio, Texas to visit some friends who also just had their first child. The main things we planned to do were take a picture at the Alamo, walk around the Riverwalk, and go to Sea World. I knew there was going to be some extra time to spare so I planned to check out four local comic book shops. This is what happened. 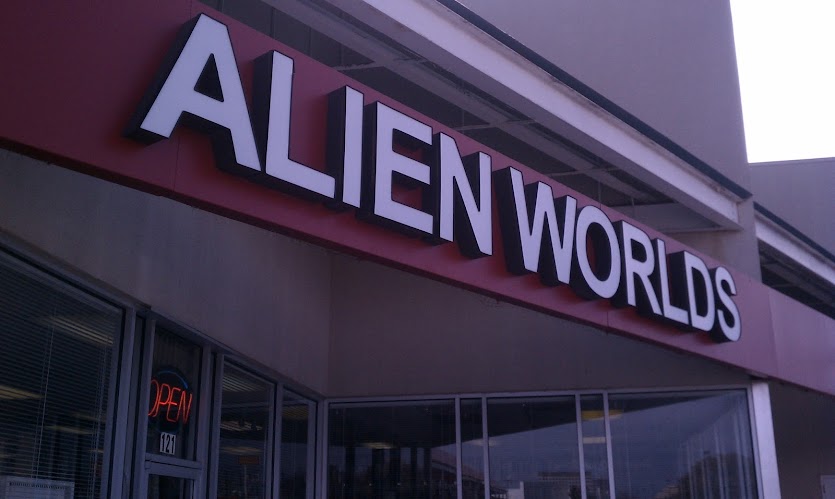 My first stop was a franchise shop called:

My first impression when I walked in was that this place was going to have some high price stickers and that I wasn't really going to find much while I looked around. I was right.
When I looked through their selection of back issues I only found a handful of issues that I was interested in picking up, but I ended up putting back most of them because they were over priced.
All of their graphic novels were on tier display shelves face out and not really organized very well past publisher.
They had a small selection of current toys which were over priced ($24.99 for a re-solicited Marvel Select Thanos and Death) and displayed so close to one another on square pod shelves which made it difficult to even look at the toys on the bottom shelves. As for older toys they had them in glass display cases or hanging on pegs with no real order to them.
Their "New Release" comics were on a table located right next to the front door, and all of the books were in stacks face up. As for current comics there were maybe 6 months worth on tier display shelves behind the new release table.
Statues, Magic the Gathering, and other items filled the wall behind the register. If you were interested in Silver Age or older books; those were mainly in at the front counter in the glass display cases in piles with some random issue on top.
They did have a lot of stuff for D&D and gaming from books to figures.
I did get a first print copy of Peter Panzerfaust #1, which I must say was a fantastic read. And I decided while looking through their back issues that I was going to bind a collection of the last run of R.E.B.E.L.S.; so, I picked up issues #4, 5, and 7.
Overall, I wasn't to impressed with Alien Worlds, but they did have a fair back issue selection that, to be honest, I would only comb through for a specific title or during a sale. 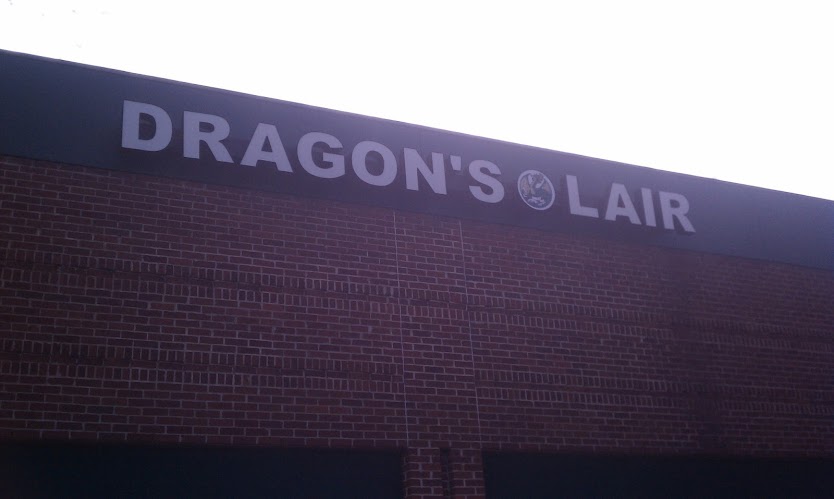 My next stop was recommendation from listener @TechMike14. He tweeted me that he goes to this franchise gaming shop called:

I wasn't expecting much in the way of back issues or comics in general from this gaming establishment, but I was surprised by their selection of graphic novels, current toys and current books. The store was very cluttered with fixtures and tables for gaming, but other than that a very nice place to browse around. The comics, new and current, were face out like they should be. The trade sections were spine out not face out, separated by publisher for all the soft covers, and all the hardcovers were in one section, which I thought was cool.
I found a great deal on R.E.B.E.L.S. 17 and 27 (fifty cents each), a first print copy of Thief of Thieves #1, a copy of the out-of-print-already (gotta love Marvel) Spider-Man: The Complete Clone Saga Epic Vol. 1, and I found the Stel action figure from the Green Lantern Series 4 that I wanted for my Green Lantern Core collection. Overall, I did get some good buys, and the manager that rang me up was nice guy so I think Dragon's Lair isn't a place to shrug off just because it is a gaming haven. 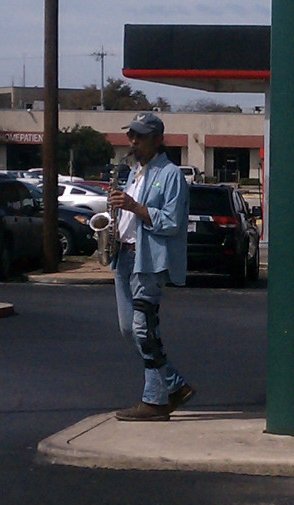 While I was in Dragon's Lair there I heard some people say that the sax man was back. I left and didn't hear anything or see this sax man. So, I thought the people in the shop were talking crazy. As I was waiting to exit the parking lot I saw that the people in the shop weren't crazy there was really a sax man outside. I really think the leg brace makes the whole look. 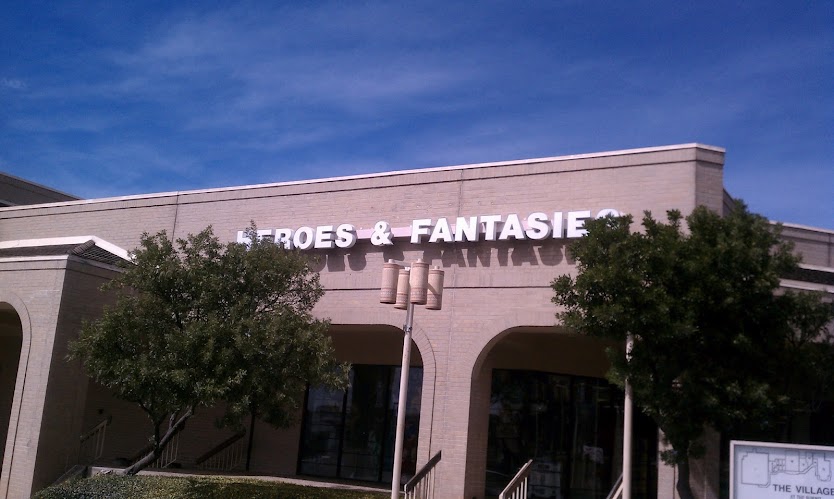 The next stop on my tour of local San Antonio comic shops was another franchised (I see a theme here in Spurs country) store called:

This store was interesting. They had a lot and I mean a lot of stuff: old and new toys, statues, t-shirts (which were displayed in three different ways: round rack, plastic box wall display and hung on t-shirt pegs), gaming stuff, lots of back issues, but their trade selections were in two different spots with no real order, and they had a couple of shelves of sets which was cool except for the fact that they were face out and out of order. If you haven't noticed the theme of being out of order yet I can't imagine why the store would be like that considering there was three people working there (on a Thursday). They were nice, but they never left the main counter except to walk to the back counter to get the subscriber's books. Very odd layout overall for this shop with the current books on face out shelves around half the front counter and new books on face out shelves between the front and back counters.
I did find a good chunk of R.E.B.E.L.S. issues: #6, 9, 12, 13, 14, 15, 16, 19, 23, 24, 26, 28, and Annual 1. I also found a few issues of Fables that I needed: #35, 42, and 43. This shop also suffered from over priced back issues, but I had given up on finding any shop that would have decently priced back issues. Even their wall books which they kept on the wall behind the back counter were a bit much, but hey to each his own I guess.
Just like Alien Worlds I would probably check this place out for a specific back issue or hit them up during a sale.

I happened to come across 12 copies of Sugar Shock by Joss Whedon and illustrated by Fábio Moon in the back issue bin (priced from $4.00 to mostly $5.00). So if Marshall who works Thrusdays at Comics Conspiracy tries to sell you a copy and we are out, you can always contact Heroes and Fantasies. 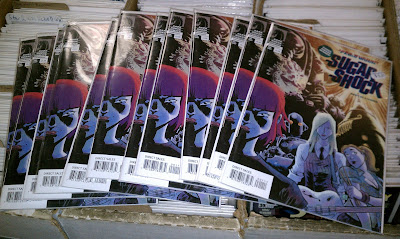 Calli called me as I was leaving Heroes and Fantasies and asked me when I was going to be back. I told her that it might be awhile or it could be a quick stop, but that I wasn't sure really how long it would take. She told me she was hungry, and since I was too, she suggested my favorite place to eat. I didn't think twice; I picked her and Brody up, and we went to get some good food at Cracker Barrel.
Anytime I travel and there is a Cracker Barrel within a reasonable driving distance I have to eat there and have the homemade chicken n' dumplins. So good! 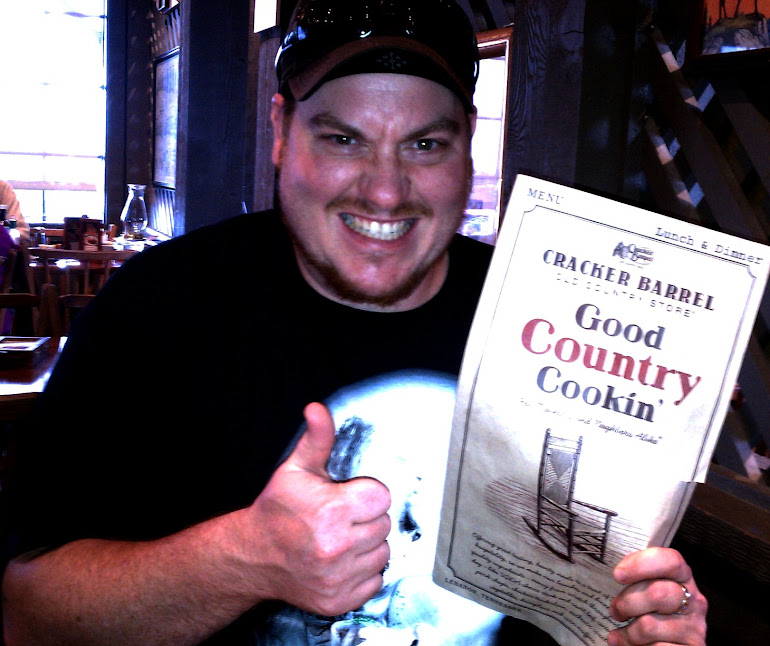 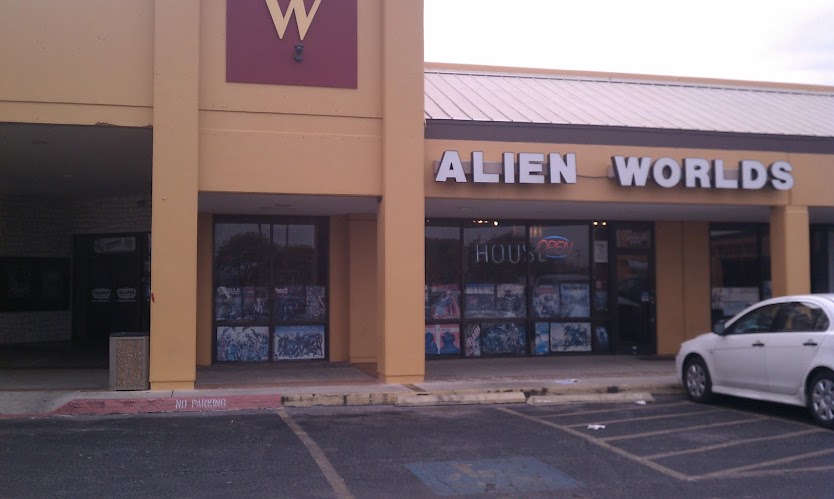 So with Calli and Brody with me I went to the last stop on my tour which was another:

Calli and Brody stayed in the car and I went in to check this place out not excepting much. Now I did know that this store was next to the Alamo Drafthouse Westlakes because of my fellow podcaster @TobyXi. From what I gathered about the Alamo Drafthouse was that it is a great place to watch movies new and old and that they do some awesome things besides show cool movies, and serve beer and food. What I didn't know was that this Alien Worlds location and the Alamo Drafthouse were directly connected; I could see the bar from the comic shop.
The comic shop wasn't much. Very small, but it did have everything the bigger shop had, but not in such an annoying amount. One of the guys that was working, Mike, was really cool and down to Earth. We started chatting and swapping stories about comics, and what it is like working in a shop with a wacky boss. He said that the location here was really great because you could come watch a movie, pick up your books, game a little and do it all while having a beer. I couldn't disagree with that at all.
(Fun fact about the Alien Worlds stores; if they are running a credit card transaction you won't be able to get through if you are trying to call; there is only one line for the phone and credit card reader. I thought that was fucking hilarious.)
Even though it was a small shop I found a issue of R.E.B.E.L.S.: #3, and I also found a toy that the second I saw it I was on the phone calling Higgins. He needed the figure and told me to try and talk the price down from $40 to $30. Mike agreed, and so I snagged the Herculoids figure - Domo, Gleep and Tundro for a good price for Higgins; he was a happy man.

Now that I have been close to a Alamo Drafthouse I can see the appeal and I completely understand Toby's excitement when he tweeted that there was a possibility of a Alamo Drafthouse coming to San Francisco. I unfortunately didn't get to experience a film at the Alamo Drafthouse, but if things work out in SF then I will definitely be visiting "The City" more.

There you have my experience of some of the local comic book shops in San Antonio, Texas. I was disappointed with some of the practices that the shops used: face out graphic novels, toys on shitty displays and over priced back issues, but despite all of that I almost got the entire run of the R.E.B.E.L.S., a couple of things I was looking for, and something completely unexpected for Higgins.
I'm glad I don't live in Texas, but if I did and I had to be a saver at one of the shops I visited I would have to go with the Alien Worlds that is connected to to Alamo Drafthouse Cinema, because combining beer and comic books is just a natural thing. Thank you San Antonio and I will most likely be back to visit.