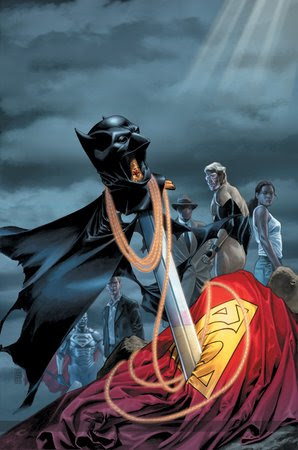 My random comic pick on The Comic Conspiracy: Episode 38 is 52 written by Geoff Johns, Grant Morrison, Greg Rucka, and Mark Waid to name a few, drawn by various artists, and with amazing covers by J.G. Jones.
52 chronicles the events after Infinite Crisis. Superman, Batman and Wonder Woman have given up being heroes to live out their lives as Clark, Bruce and Diana. After their departure other heroes emerge to fill the space left by these three power houses.
This DC series was released weekly for one year from May 2006 and until May of 2007. Early 2007 is when I got back into comics and 52 was recommended to me by Ryan Higgins, so I picked up a few of the early issues, and immediately I was blown away. I can rightly say that this is where DC hooked me and I have been a DC guy ever since.
I must say that 52 is a great introduction to some of the lesser known characters in the DC Universe and overall a wonderfully good read from start to finish. It is collected in four trade paperbacks, or you could track down all 52 issues (We may have a set at the shop. Contact Ryan), or you can start 52 digitally with Week #1.