*Update - 1/31/14: Did you enjoy The Comic Conspiracy Book Club Selection Blue Estate Vol. 1? Seven people voted on this poll. Here are the results: 3 Yes Votes, 2 No Votes, and 2 Votes for Indifferent. Thanks for voting. 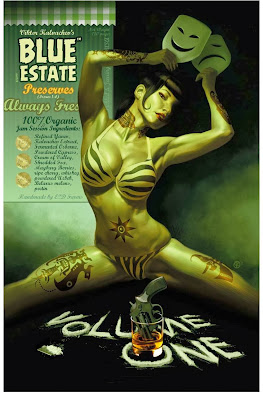 "Blue Estate deals with a low-rent private eye trying (and failing) to escape the long shadow of his respected cop father. But a chance encounter with a B-list action star drags the wannabe gumshoe into a world of strippers, mobsters… and the wildest (and only!) case of his career! See who lives, who dies, and who gets the Tiger Blood knocked outta them in the first four issues of the fast, funny smash hit new crime series from Image Comics."

My selection for this month's Comic Conspiracy Comic Book Club is Blue Estate Vol. 1 by Viktor Kalvachev, Andrew Osborne, and Kosta Yanev with art from Toby Cypress, Nathan Fox, Viktor Kalvachev, and Robert Valley. This title is just a fun ride of booze, drugs, guns, money and women. If you have ever seen the movie Kiss Kiss Bang Bang starring Robert Downey Jr. and Val Kilmer then this book will be right up your alley. If you haven't seen Kiss Kiss Bang Bang then you should, because it's a really great movie that is just a fun ride of craziness. That reminds me I need to re-watch it.
Blue Estate came to my attention when I was browsing the free comic book selections from Image on Comixology a few years ago. It was the covers that really grabbed my attention. Being a physical comic guy I hesitated at first to check a book out by its cover, but eventually I caved, and gave the first trade a try. I was instantly hooked.
So, for all of you out there thinking, "Aw man not another random Image book club selection from Brock," you can at least give the first issue a read here for free, and see for yourself. I think you will be surpirsed at how much fun Blue Estate can be.


We will discuss this title at length on Episode 143 of the Comic Conspiracy, which we will record on January 27, 2014.