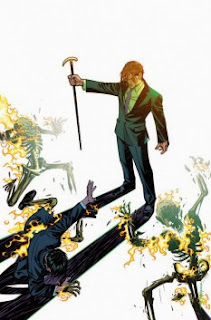 Boom! released the first issue of a title called Day Men, written by Matt Gagnon and Michael Alan Nelson with art from Brian Stelfreeze, back in July of 2013. The book looked interesting enough so, I decided to give it a read.
I ended up enjoying Day Men, and was ready to read the next issue, but it never came. Eventually, I completely forgot about Day Men, but then what should happen Day Men #2 was on the new release wall at Comics Conspiracy this week.
So, on my reading pile is a copy of Day Men #2, and I am still looking forward to reading this book despite the delay in its release.
Be sure to check out the letters page, which has a honest explanation from the creators about why this book was so delayed in its release. And you might just get something cool from the creators if you like taking pictures with a comic and emailing them.