*Update - 1/7/14: Did you enjoy The Comic Conspiracy Book Club Selection Infinity Gauntlet? Ten people voted on this poll. Here are the results: 8 Yes Votes, 1 No Vote, and 1 Vote for Indifferent. Thanks for voting. 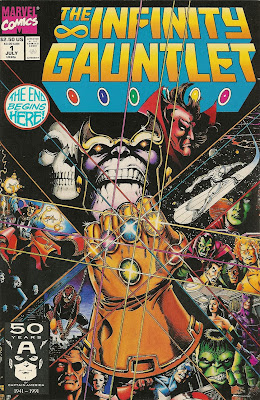 "The Mad Titan Thanos has seized control of Infinity Gauntlet and with it near-omnipotent power! Who can stop this deadly new overlord? All of Marvel's top heroes star in this epic of cosmic proportions!"

Ryan's selection for this month's Comic Conspiracy Comic Book Club is Infinity Gauntlet which is a classic Marvel story from the 90's about Thanos's completion of Death's task; erase half of the sentient life in the universe. He can do this, because he has possession of the Infinity Gems. If your curious as to how he got them read Silver Surfer: Rebirth of Thanos to get the story of Thanos's journey to acquire all the infinity gems.
Each gem grants its bearer complete mastery over one aspect of the multiverse: Time (orange), Space (purple), Mind (blue), Soul (green), Reality (yellow), and Power (red). So, equipped with the Infinity Gauntlet Thanos has the power to quite literally destroy the universe with a snap of his fingers. Written by Thanos creator Jim Starlin and penciled by the awesome George Pérez and talented Ron Lim this title is a must read for comic book readers.

This book collects the six issue mini-series of this line wide event.

I have not yet read Infinity Gauntlet; I know total sacrilege, but I just haven't gotten around to it. I did read Silver Surfer: Rebirth of Thanos, and loved that book. So, I was actually excited to hear that Ryan was choosing Infinity Gauntlet as his Comic Book Club Pick. Now I have no excuss not to read this book, and niether do you. So, get your hands on a copy and read it.


We will discuss this title at length on the last episode of The Comic Conspiracy this year. Due to the holidays we are not sure when we will record this episode so stay tuned for more info.