We did Random Hardcover Picks on The Comic Conspiracy: Episode 82. One was a super hero title and the other a non-super hero title. Here are my picks: 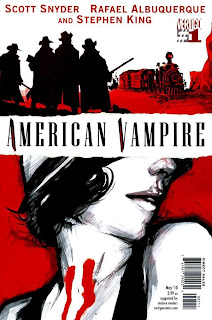 For non-super hero I went with the Vertigo book American Vampire written by Scott Snyder with art by Rafael Albuquerque. I have read this title from the beginning and at first I wasn't sure if I was going to like it, but that changed quickly. This Vertigo title has been an amazing read since the beginning, and it has even had a few mini series that have explored more of the world of the American Vampire. Snyder has created a memorable world with American Vampire and Albuquerque  has brought that world to life. This book is definitely worth picking up, and I have been putting off getting the hard covers myself, but I had Ryan order them for me this week. Can't wait to put them in my library. 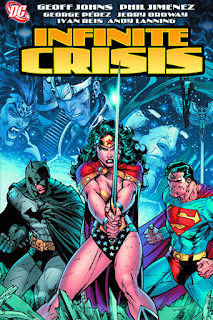 For my super hero pick I went with Infinite Crisis by Geoff Johns with art by: Phil Jimenez, Jerry Ordway, George Pérez, and Ivan Reis. I actually need to go back and read this book again, because it has been some time since I read it. It is a great book that I recommend to people all the time. When Ryan had Geoff Johns at the shop for a signing I hadn't yet read the book, but I bought the hardcover anyway for Johns to sign. He actually sketched a head shot of Batman inside, and for a writer to do that I thought that was pretty cool. Needless to say I read Infinite Crisis, and after getting more exposure to DC and Johns's writing I can say with certainty that Infinite Crisis was the tipping point for me when it came to reading the big two. So, yes I would say pick up Infinite Crisis; it is a great book that you won't be disappointed about picking up


Remember you can download digital comics at our Comics Conspiracy - Comixology Storefront or you can order comics from us directly by visiting the shop, giving us a call (408) 245-6275, or dropping Ryan an email at ryan@comicsconspiracy.biz.