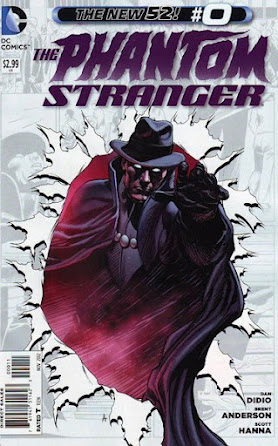 My random Marvel comic pick on The Comic Conspiracy: Episode 77 is The Phantom Stranger #0 written by Dan Didio with art from Brent Anderson. At first, I was very skeptical of this book, because it had been written by Dan Didio, and his track record with the "New 52" hasn't been so hot; with the cancellation of OMAC and the horrid Challengers of the Unknown story arc in DC Comics Presents. Not to mention the fact that he wrote those shitty issues at the end of the last volume of the Outsiders, which I blame heavily for its cancellation. But I will admit I was pleasantly surprised with The Phantom Stranger. This issue zero was a great introduction to the character and his origins in the "New 52". Basically, The Phantom Stranger is Judas who betrayed Jesus for thirty pieces of silver. This betrayal is his sin, and the council of wizard's punishment for Judas is that he must wander the Earth as a stranger with a cloak and a necklace made of thirty pieces of silver. In that explanation I used more religious information than the actual book did. I appreciated the fact that Didio didn't go all bible story on us, and just kept the core idea of what we needed to know about the character, which impressed me greatly. If you are at all interested in the "New 52" and where they are taking things this year I think this book is a definite read, and with The Phantom Stranger #1 coming out Wednesday (10/10/12) I highly recommend picking up this zero issue to see if you should start getting this ttle added to you pull or reading list.