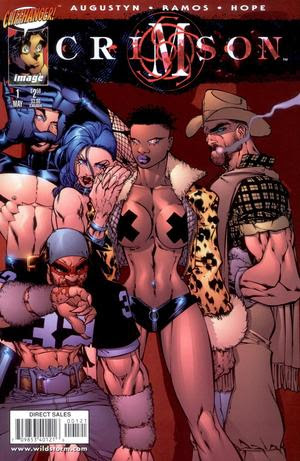 Crimson was a comic created by Humberto Ramos and Brian Augustyn back in 1998. This series ran for 24 issues (with a few specials and random issues), during which it jumped publishers. It first came out under Image Comics creator owned imprint Cliffhanger, and then it ended up finishing its run at DC's Wildstorm imprint.
When I went through my collection recently I decided to pull this series out to get bound. I had been picking up this title since issue one, but I had never read it, or finished picking up the later issues. There were a few covers for some of the issues and a chrome version of one; not to forget the random preview and premiere issues, but I felt it was a good amount of books to put into a single volume .After a little bin diving I had a complete run except for that premiere issue. I have to give a big thanks to Lane Teresaki for getting me that premiere issue, which actually has Ramos's signature on it.
Crimson is ready to get bound. This binding is going an experiment in getting multiple covers bound and a chrome cover. Some of variant covers were Dynamic Forces editions with the certificate, but I think I'm just going to throw those away since having them bound feels kind of lame.
The actual volume will have a black cover with red font and a red book mark. I know it is the cheesy way to go, but it is a book about vampires. I do need some input on if I should call it a volume one or just go with the year for the labeling of the spine. Let me know what you think about the labeling, and any thing about the binding by leaving a comment.