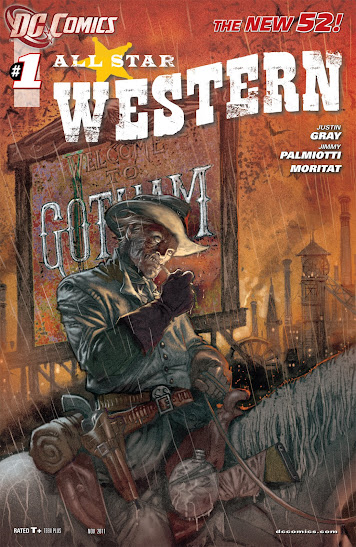 My random comic pick on The Comic Conspiracy: Episode 51 is the "New 52" DC Comics title All Star Western written by Justin Gray and Jimmy Palmiotti with art by Moritat.

Before the "New 52" I had a slight interest in reading about Jonah Hex, but after hearing that the film was garbage that interest faded. Then the titles were announced for the "New 52". I still didn't really have an interest in reading a book with Jonah Hex in it, but during those first few months of uncertainty there was a lot of talk about what DC was doing, what people were going to check out, and All Star Western actually made it onto my pull list because a few people recommended it highly enough.
All Star Western, overall, is a great title that takes the reader back to a simpler yet tougher time in the DC Universe where the skies weren't filled with capes, and there wasn't a crisis around every street corner. Gary and Palmiotti have given us a world where guts and grit, blood and bone, and the general since of being a tough son of a bitch are being replaced by manners and industrialism. This is the world Jonah Hex finds himself in, and as the last real man standing he isn't one to go down without a fight.
Ever since I started picking up All Star Western I have been in love with these stories that follow Jonah Hex in a 1880's Gotham City with Amadeus Arkham along for the ride. And I don't want to forget the back up stories that add so much more for the reader to enjoy about this world. So, if you like great story telling with art that really fits the writing style then you should be picking up All Star Western.

Remember you can now find this title and more in digital format at our Comics Conspiracy - Comixology Storefront or you can order comics from us directly by visiting the shop, giving us a call (408) 245-6275, or dropping Ryan an email at ryan@comicsconspiracy.biz.