*Update - 3/17/14: Did you enjoy The Comic Conspiracy Book Club Selection Gotham City Sirens (Vol. 1): Union? Five people voted on this poll. Here are the results: 3 Yes Votes, 2 No Votes, and 0 Votes for Indifferent. Thanks for voting. 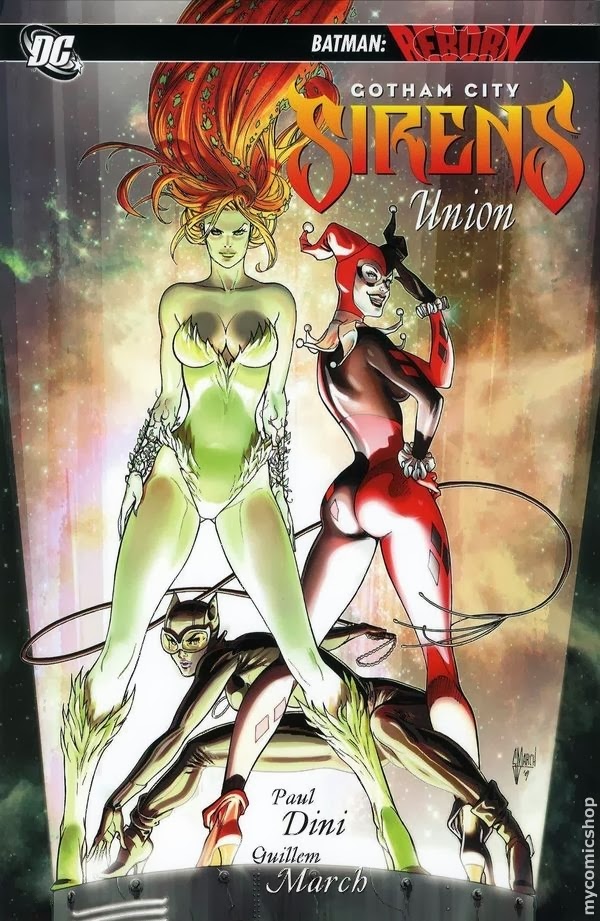 Trade Paperback - $50 or more on Amazon

"Catwoman, Poison Ivy and Harley Quinn have a new agenda. They are tired of playing by other people's rules — now they're planning to strike out in their own unique way."

Omar's selection for this month's Comic Conspiracy Comic Book Club is Gotham City Sirens (Vol. 1): Union by Paul Dini with art from Guillem March. I want to apologize to you readers out there about this book club selection. Omar didn't follow the key requirement for a book club selection, which is it has to be "IN PRINT". We understand if cannot afford to participate in this month's book club.
Batman's female villains team up in this series, and it is a great book about three of the prominent female Batman villains. The art is amazing in this series and for those of you who read the New 52 Catwoman series you know Guillem March's work; truly fantastic. Well you can decide if you want to check out this month's book club selection digitally, but for me I have to dig out my single issues for this one.

Omar mentioned Guillem March's art book Cover Girls, which is on my list of to buy art books. I've flipped through it, and the work is a tribute to the female form.
Cover Girls - Buy on Amazon | Buy on Comixology

We will discuss this title at length on Episode 147 of the Comic Conspiracy, which we will record on February 24, 2014.

Contact the Shop to file a complaint about the fact Omar picked a title that is "Out of Print".:
408-245-6275 or email Ryan at ryan@comicsconspiracy.biz