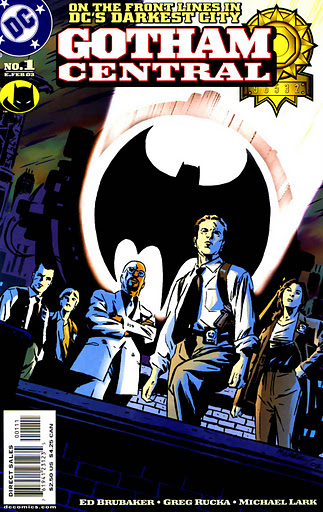 My random comic pick on The Comic Conspiracy: Episode 28 is Gotham Central written by Greg Rucka and Ed Brubaker with are by Michael Lark. I picked this up on a recommendation and loved it, which is how most people came to love this series. It started in 2003 and ended with issue 40 in 2006. It follows the Gotham City Police Department and the lives of those who serve an protect in the city where Batman prowls the streets and super criminals run amok.
Some of the main characters that appeared in the series were Marcus Driver, Romy Chandler, Renee Montoya (who later becomes the Question), Crispus Allen (The Spectre) and Josephine "Josie Mac" MacDonald. A good lead cast has good supporting character and these were mainly the superiors at GCPD, Commissioner Michael Akins, Captain Margaret "Maggie" Sawyer and Lieutenant Ron Probson. You will also find Batman, James Gordon and Harvey Bullock makes appearances throughout the series.
Gotham Central is collected into four hard covers and five soft trades. Here is a list of the soft trades:

The whole 40 issue series is available for digital download through our Comics Conspiracy - Comixology Storefront.
If you like any type of TV police drama or even just a good story I would pick up Gotham Central and see what happens in the lives of those on the GCPD.